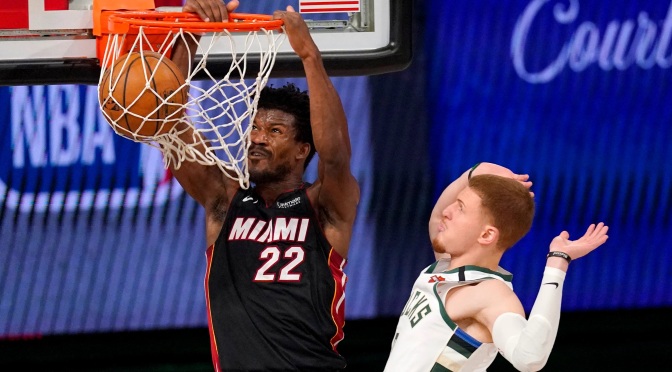 Antetokounmpo, who was recently named NBA Defensive Player of the year, and likely to be named NBA Most Valuable player, suffered a ankle injury at the end of Game 4 in which the Bucks avoided a sweep, could only sit helplessly as his NBA-best Milwaukee squad would lose to a team that just couldn’t seem to solve in the faster, more athletic Heat.

Despite having the best record, best offense and defense and the best three-point shooter in George Hill, the Bucks couldn’t sustain their play once the NBA Restart down in Orlando resumed.

Over the last two seasons, the Bucks have had the league’s best record, but lost to the eventual NBA champion Toronto Raptors in six, and now were on the receiving end of a gentlemen’s sweep.

Call it excuses or whatever self-validation for why the Bucks were eliminated, but they are now done, and must now begin to answer the biggest question; will Giannis stay in Cream City or will he follow in the famed footsteps of LeBron James and take his talents elsewhere?

For the Heat, this is the first East Finals appearance since 2014, where they will await the winner of the Boston-Toronto series, where the Celtics are up 3-2 over the Raptors.

Being hip is cool and being cool is hip, The Spectator Mag, INSCMagazine’s urban-themed vertical will cover the latest and coolest in sneakers, hoops, lifestyle and hip hop.
Follow The Spectator Mag | Sneakers, Hoops, Lifestyle & Hip-Hop on WordPress.com